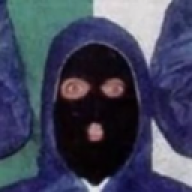 Guns of the Conclave
Rank: None
Service Points: 0
Suggestion: a black market tab that becomes available for use once you reach a certain amount of penalty points, are Most Wanted, and/or a Fugitive.

Cons:
- items purchased off the black market give a higher PP fine if scanned

Possibilities:
× New form of currency to be used only for the black market that criminals can earn from illegal actions or missions maybe?
× Ability to sell fake items? (Listing an item as another item to scam individuals of money)

This would encourage a more criminal lifestyle and gameplay niche for those that want to play that way and generates a new form of income for suppliers.

open for discussion and further input from the community.

*I'll be adding more to this idea at some point. Pros/cons etc.* The Syndicate
Rank: None
Service Points: 0
Full support. I'm just gunna copy my response over from discord but yeah. Big fan of the idea.

How'd you feel about certain items (or say weapon modifications) being behind a PP requirement? I don't mean "better" stuff necessarily. But say like, cop killer rounds are accessible after...100 pp? That way you can induce a little scarcity because if you get caught you lose access to parts of the shop and gotta "work" your way back up. Also that could open up a whole new market. If you don't want to collect the PP yourself, can always pay some criminal for the guns/equip/etc
Click to expand... Guns of the Conclave
Rank: None
Service Points: 0
That would be cool actually, some kind of black market where you could buy pvp equipment cheaper when you got x amount of PP or something

The Syndicate
Rank: None
Service Points: 0
I disagree with having things limited behind a PP requirement. I also disagree with any sort of system in which the game is the supplier rather than the players. Players should be the ones making and selling the items in the game. Limiting who can make it is fine, but as long as it's driven by the players and not the game selling off the items. Otherwise, why have players produce anything at all.

In a similar fashion, a black market system like this opposes player interaction. If we have a black market in which I can put ana on it for sale and those with PP can buy it, every layer of that transaction and the risk of doing it is taken out. I shit out a bunch of ana, throw it on the market and somebody buys it and we never interact once. I take virtually no risk, they take virtually no risk.

There will be no scams for items/UC, there will be no deals gone bad. There will be no set ups to get you yeeted by CPC. There will be no building a reliable customer base and a need for trust between parties. Instead, you're just going to get told to "go find a black market terminal and buy it off there" with some arbitrary PP restriction that you have to farm to buy illegal shit so that there isn't risk involved. Maybe large scale deals will be done through player-interaction, but most through a terminal.

This is dangerous because what it does is it makes the gameplay loop surrounding illicit trade the same as it is for corporations. Spreadsheet Data Recipes > Farm Resources > Produce Illegal Item > Put Illegal Item on Market > Check every day or 2 to collect money > Rinse & Repeat.

That's what sucked about FoM, that every faction was treated the same and their gameplay was more or less the same.

However; what I do agree with and support is the notion that gaining PP opens doors. As a player gains PP, the begin to lose Union privileges and have certain restrictions/sanctions imposed on them (doors are being closed). But they should also have new options and opportunities that become available because of their level of PP (doors are being opened). In this sense, it's choosing a path. If you choose to go down the criminal path, you lose some of your government-granted rights, but you gain more access to things in the criminal underworld that you may want/use and wouldn't normally have access to. If you stay on the straight and narrow, you maintain your government-given rights but don't have any of the criminal ones.

What those doors are that open are things we'd need to brainstorm, and maybe the whole illegal insurance thing previously discussed may be something that would fit into there. But I don't think this type of black market system would be great for that because it doesn't help promote a different gameplay loop, but rather tries to consolidate it into one.
Reactions: Lycun and MacgyverTheDiver

The Syndicate
Rank: None
Service Points: 0
What if it was made into a deployable terminal not a static one? Obviously for balance this would have to be something that say FOE could also use. But you can deploy a "black market terminal". Bam, now players are the direct suppliers and shit can go wrong. If people are worried about money, only give players a % of what's spent at the terminals (consider it a fence fee). I think even just this small change would help address that concern (and a good one to have)

EDIT: The cool thing with doing it this way is each cell/family can have it's own black market. Creates potential for more competition/interaction with the different players.
Last edited: Mar 9, 2021

The Syndicate
Rank: None
Service Points: 0
A deployable would alleviate some issues, but the core issues would still remain. The gameplay loop continues to mimic that of Corporations, in which illicit goods are traded via UI interfaces between people who never actually have to physically interact with one another and they get to do so in a risk-free environment. All for simply getting scanned with some drugs on them, which is something that CPC could do for one another and have access to any black market.

I also fear that it would propose a new problem in that it would be confusing to new players. Having to explain that there are two different kinds of markets — normal and black market. Normal markets are on every world in specific locations and the listings on them are all legal items. And those listings only apply to that world so each world is different. Then you have black markets that have illegal items on them, but can be literally anywhere and listings only apply to that specific deployable.

Further than that, each black market is owned by a different group, and each one will vary in its listings. These black markets only benefit whatever gang owns it, because there is absolutely no reason for them to allow outsiders to sell on their terminals. Even if the owner of the deployable gets a cut, why would I want a rando to sell drugs on my terminal where I get a 25% cut where I could just sell it on there myself and get all of it? I've got no reason to support their business when they're a competitor.

Even if we didn't wind up allowing non-SYN to get their hands on the deployable, in time we'll have a dozen or more of these black markets around due to the sheer number of gangs that will exist. We may wind up with more black markets than world markets in the end.

Black Markets don't even benefit SYN, because they invalidate a portion of our player base. I would no longer need R1s and R2s to hit corners and peddle drugs for me. I could downsize to a skeleton crew capable of running the drug lab. Spend 2-3 hours every week shitting out some of every drug/illegal item, and then tossing them up on our market. Then I just hibernate until the next one and collect and split profits with the handful of other people who assisted. I no longer need distributors that build connections and find people to sell our drugs/guns/concealers/illegals to.


I haven't spent much time thinking about this idea, but maybe as a potential way to salvage the idea of a 'black market' while also 'opening new doors for criminals' is to be a little bit more literal and actually open new doors. Perhaps some location on some map that you could only get access to if you had a certain PP threshold and/or weren't CPC/TDC?

And that location would be designed to just be a illicit trading hub where people with something to sell or people looking for something to buy can have an easier time potentially locating one another? Maybe not a great idea, haven't thought it through yet. But ¯\_(ツ)_/¯
You must log in or register to reply here.
Share:
Facebook Twitter Reddit Email Share Link
Top Bottom