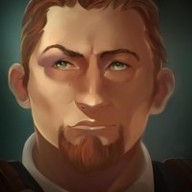 Civil Protection Commission
Rank: None
Service Points: 0
"We are all bad people, the perception of our goodness or badness just depends on who is watching"
​
The subtle thud of raindrops could be heard from within the confines of the dimly lit apartment. The spartan surroundings of the studio almost enhanced the vibrant echo of silence that blended in with the dismal reality of life that Jarek had come to grow accustomed to. It was that obnoxious ring of his preset alarm that pierced the silence of his room, causing a loud groan and a subtle "Fuck" to be emitted from his lips. His eyes opening lazily, staring up at the ceiling as the alarm continued to squawk like a disgruntled spouse requiring immediate attention. With a sluggish roll over to his side, Jarek found himself slamming down on the somewhat retro alarm that called his nightstand home. However, in his mild stupor he also knocked over several empty, and half empty bottle of liquor that also occupied the space and came tumbling down to the surface beneath the stand with a loud clank, and then a rattle as they rolled around.

Pushing himself up, Jarek found his feet welcome by the cool liquid that had dripped out from the spout of the bottles below. A heavy sigh would spill out into the air, cutting through it like heated knife. As he did every morning, he would extend both arms out, staring down at his hands while sitting on the edge of his bed. To him, it was a test to see just how drunk he was, or maybe it was in an effort to see how much he could function. But as most mornings, his hands shook for several moments before stabilizing. The diminished lighting in his domicile outlined the differences between his sole tattoo'd left arm, covered in a full sleeve and the untouched flesh of his right. It seemed like hours that he sat there, arms out, staring down at his hands as if waiting for something to come that he knew would never show up. In reality, it was all of several minutes before he dropped his arms down to his side and worked up the motivation to get upright and begin his short trek to the bathroom.

Jarek's feet would thud with every step, his one liquor covered foot leaving imprints on the floor with every step closer to the bathroom. He could already hear the buzz coming from the bathroom lighting, beyond the ajar door separating it from the rest of his living space. However, just before entering something had caught his eye. Turning to the wall near a lone dresser in his room, his gaze fell upon a metallic shadowbox with a dim neon back light. Taking a moment, he would look at the display that he seldom ever paid attention to much anymore. Housed within the box, several medals were on display, remnants of service during the frontier wars. His focus on a piece of the past was nothing more than a mere glance before continuing into the bathroom. The contrasting bright light caused him to wince, his pupils dilating to compensate for the rapid transition from dim to bright. The rush of running water colliding into the metallic bowl of his sink filled the room, hands reaching down to cup the cold water as he leaned forward and splashed himself in the face.

As Jarek looked up from the sink, the reflection in the mirror had become more and more foreign to him. Even as he used a nearby towel to clear the remaining water from his face, it did little alleviate the fact that he saw himself as something little more than a familiar husk. Shutting the water off and dropping the towel down on the floor, he would use it to dry off his uncomfortably soaked foot. Shifting his gaze, the clock on the wall projected large digital numbers and the indication was that he was already running late. This was nothing new to him. The sluggish response time he had previously been plagued with as he forced himself out of bed was wearing off, and by the time he was pulling on a pair of black dress slacks and the accompanying gray button down shirt, he was awake enough to want to be drunk again.

Jarek had just finished lacing up his shoes when he heard several loud thuds against his door. "One minute!" he bellowed towards the door and stood up, moving towards the dresser to reach for his tie. Again, the door would bang, and again it would be several times over. "I said one fucking minute!" barking once more in retort to the heavy handed bang, as it to ring true the rapture. As he reached for his watch, he would be distracted by a photo frame that was face down. Reaching for it, instead of his watch that was laying next to the downed frame, he would move to return it to its correct position. The digitally displayed image was that of two children, standing in front of two adults who gave off the perfect impression and image of a loving family. The male in the image was that same husk he faced every morning in the mirror, the woman a love from what felt like a different life.

Having finally made it to his door, Jarek was there just in time to stop another round of knocking mid barrage. Pulling the door open, he would stare down a medium sized figure wearing a black suit. The male at his door seemed young, at least compared to the aging thirty-eight year old who was staring him down. "Who the hell are you....actually, just...what do you want?" inquiring in a gruff tone. The kid straightened up, smoothing out his tie as he pulled the right side of his jacket some, exposing a well shined CPC Badge clipped to his belt. "Marcus Tinamou, pleased to meet you, sir. I was sent to come pick you up, we are going to be working together!" the kid exclaimed. Without any verbal response, Jarek would stare at the kid and then down at the exposed badge for a moment, before the jacket fell back into place and concealed it. "You got to be shitting me, I suppose the super is to thank for this?" he asked, knowing full well the answer.

Sitting next to the door was a stand, resting atop the stand was a holstered pistol and an aged looking CPC badge on a belt holder. While the kid began to talk about his recent transfer into the Criminal Investigation Unit and how excited he was to be partnered with Jarek, it all sounded like a mash up of muted garble. It rushed in one ear and out the other, all the while Jarek shoved the holster onto his belt. Once his badge was secured not far from the holstered firearm, he finally resumed paying attention to the kid. Stepping out of the doorway and into the hallway of the apartment building, he would push passed the young investigator with a firm shoulder, just before slamming the door shut. "Listen, do me a favor and shut up for a minute. I get you are supposed to be my new baby sitter or something, but make yourself useful and take us to get some breakfast before going in. Can you do that?"

With a deflated nod, Marcus straightened up and gestured towards the elevators at the end of the hallway. And with that, it was the start of another day for Jarek, another day in a sea of endless days.
Reactions: TheJoker and Jord
You must log in or register to reply here.
Share:
Facebook Twitter Reddit Email Share Link
Top Bottom